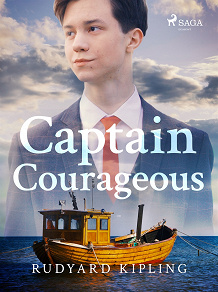 by Rudyard Kipling
When Harvey, the spoiled fifteen-year-old son of a railroad tycoon, falls overboards, he is saved by a fishing boat. The gruff and hearty crew teach him about fishing and life on the boat. A fun, thrilling adventure on the sea, "Captains Courageous" from 1897 is Kipling’s only novel set entirely in America.

Joseph Rudyard Kipling (1865-1936) was an English author, journalist, poet, and novelist. His most famous work is "The Jungle Book" (1894), inspiring two Disney adaptations; the 1967 animated feature and the 2016 live-action film starring Scarlett Johansson, Bill Murray, and Lupita Nyong’o. In 1941, he became the first English-language writer to be awarded the Nobel Prize in Literature.