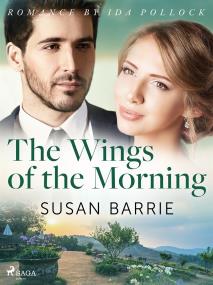 The Wings of the Morning

by Susan Barrie
No one is more surprised than Kathy when she receives an invitation from Lady Fitzosborne for some weekend festivities. Usually, such invitations are extended to her more attractive two sisters. She prepares to make herself useful and instead manages to catch the eye of a Portuguese aristocrat. The mystery man woos her, setting off events almost too dreamy to be true. Yet as their relationship deepens, Kathy soon discovers that there is more to the man than meets the eye. The Cinderella-like romance tale from the 20th century was written under one of Ida Pollock’s pseudonyms, Susan Barrie.

Susan Barrie is a pseudonym of Ida Pollock (1908 – 2013), a highly successful British writer of over 125 romance novels translated into numerous languages and published across the world. Ida Pollock has sold millions of copies over her 90-year career.