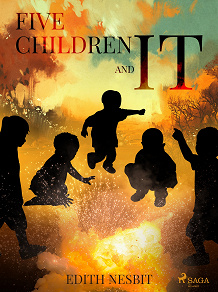 Five Children and It

by Edith Nesbit
Five kids uncovering 'It' while playing in a gravel pit might sound like a passage in a Stephen King novel but forget about eldritch murder clowns for now, as E. Nesbit is kicking off her 'Psammead Trilogy' with a children's novel about a grumpy, wish-granting sand-fairy.

True to the classic trope of 'be careful what you wish for', and with children being some of the most... let's say impulsive people on the planet, each wish spectacularly backfires. Not just a source of humour and suspense, the fallout also provides timeless lessons of the dangers of greed, vanity and other deadly sins to the target audience.

'The Phoenix and the Carpet' (1904) and 'The Story of the Amulet' (1906) complete the trilogy. Having never gone out of print, 'The Five Children and It' has been adapted into a comic, an anime, a stage musical, a TV series and a 2004 feature film featuring Eddie Izzard as It.

Edith Nesbit (1858 – 1924) (married name Edith Bland) was a prolific English author and poet, writing primarily children's books under the pen name E. Nesbit. Her work often characterized by a mix of realistic settings with fantastical elements, Nesbit went on to influence writers such as C.S. Lewis and J.K. Rowling. Her most notable works include 'Five Children and It' (1902) and 'The Railway Children' (1906) which have never gone out of print.