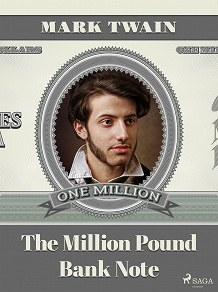 by Mark Twain
Swept out to sea in a boating accident, Henry Adams is penniless and in rags ashore in London. Whilst roaming the streets, his luck changes; two brothers hand him an envelope with no explanation. Inside lies a banknote worth one million pounds. But how can a penniless man prove that he legally possesses such a banknote? What urged Adams to sail away? Why did the two brothers give away their fortune?

Combining wit, humour and humility, Mark Twain’s 19th century short story provides a social commentary ideal for fans of Steven Spielberg’s ‘Catch Me If You Can’. Made into a BBC Radio 4 adaptation, ‘The Million Pound Bank Note’ remains a funny and poignant tale of power and greed.

Mark Twain, pseudonym of Samuel Langhorne Clemens (1835-1910) was an American humorist, lecturer, journalist and novelist. Celebrated today as the father of American literature, his work spans epic stories of boyhood such as ‘The Adventures of Tom Sawyer’ and ‘The Adventures of Huckleberry Finn’, as well as travel narratives, such as ‘The Innocents Abroad’, ‘Roughing It’, and ‘Life on the Mississippi’. A friend to presidents, artists and royalty, he is remembered today as a popular public figure. Continuing his influence, Twain inspires Disney attractions, singer Tom Petty’s ‘Down South’ and was portrayed by Nathan Osgood in the 2018 comedy ‘Holmes and Watson’.