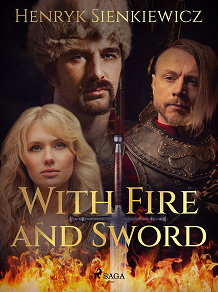 With Fire and Sword

by Henryk Sienkiewicz
This Polish 'Gone with the Wind’ is set in 17th century Poland during the Cossack-Polish War as the Kingdom of Poland struggles to maintain unity. It is a historical epic, in the same vein as Dumas or Walter Scott, where a stunning plot is weaved through actual history to create compelling and brilliantly grounded characters.

An epic story with a stunning ensemble of real and fictitious characters, whose passion and vitriol leap off the page. It is a novel of Polish identity and belonging, written in a time of Polish partition, which brought immense patriotic pride to the embattled nation. It is a novel that has rightly earned its place as an epic. If you loved the BBCs ‘War and Peace’ you will love this classic tale.

Henryk Sienkiewicz (1846-1916) was a Polish fiction writer who was awarded the Nobel Prize for Literature in 1905, for his outstanding merits as a writer of epic fiction. He became one of the most famous authors in Poland at the end of the 19th century before translations of his work catapulted him to international renown. Many of his works remain in print today with his most famous novels being ‘With Fire and Sword, ‘Quo Vadis’ and ‘Sir Michael’.